20 Common Japanese Words You Should Know Before Going To Japan

Not all people in Japan know how to speak English. To make your life easier when you travel there, learn these essential 21 words and phrases.

For English speakers, Japanese or Nihongo is one of the hardest languages to learn. Not only is it very different in English, but it’s also very challenging for other language speakers as well.

Although there are fun ways to learn Japanese (such as learning with Japanese songs), learners need to make more effort when learning this language.

Unless you have a friend who can speak Japanese, it is recommended to learn essential words and phrases before going to Japan. Japan is known for being a service-based country.

A lot of things in the country require you to speak to people. You don’t need to be very proficient at speaking Japanese on your first days. But knowing the essential words can help you get through.

Here are 21 useful Japanese words and phrases to learn before going to the land of the rising sun.

7 Japanese Words For Everyday Use That Beginners Should Learn

Being polite in Japan is a big deal, so knowing polite words is a big help in making new friends. This includes thanking someone who helped you in one way or another. You can thank someone by casually saying “arigatou.” But for formal conversations (e.g., talking to someone older), use “arigatou gozaimasu.”

Tip: don’t forget to thank the store personnel. Since Japan is a service-based country, thanking them after helping you will make their day.

The word sumimasen is both used for excusing yourself and apologizing to someone. It can be a little confusing for English speakers because of multiple meanings. Think of it like this: sumimasen is used for apologizing when you made a mistake or caused inconvenience.

There are simple ways to communicate “yes” or “no” (e.g., nodding or shaking your head). However, knowing how to use these words in a sentence is a must for some cases. You can’t just nod or shake your head. Use hai if you agree or want to give an affirmative response.

Iie is used for expressing denial or refusal to a question or request. Tip: Both words have vowel combinations. In Japanese, these combinations are usually not pronounced.

Like other foreign languages, the most popular word in the Japanese language is Konnichiwa or “hello.” It can be used regardless of the age or status of the person you’re talking with. Although you can only use it at certain hours, specifically when the sun is still in the sky. This is because the word literally means “the sun” or “today”.

Gomenasai is the same as Sumimasen in meaning. Both are used when apologizing to someone. The only difference is that Sumimasen can have different meanings, while Gomenasai is solely used for saying sorry. And while Sumimasen is formal, Gomenasai is typically used on friends, family, and close relatives.

Wakarimasen is something you’d say a lot during your first conversations once you started picking up Japanese. When you don’t understand or hear something properly, wakarimasen is often a proper response. This word is also used for cases where you understand the question, but can’t seem to find an answer.

Tip: It is not the Japanese equivalent of “I don’t know”. For responses where you have knowledge of something but cannot give a concrete answer, the best Japanese word to use is Shirimasen.

Daijoubu desu is another versatile word in the Japanese vocabulary which you can use in several instances. It can mean “yes”, “it’s okay”, and “I’m alright”. But what if you’re the one asking if someone’s alright? You can transform this phrase into question by adding -ka on the end. (Daijoubu desu ka?).

Meaning: Up, Down, Right, Left

Traveling is quite straightforward in some areas of Japan, especially in rural places. But in crowded cities like Tokyo, things can a little bit overwhelming. In this situation, knowing directional words in Japanese is necessary.

Here’s a visual representation of the directional words in Japanese. 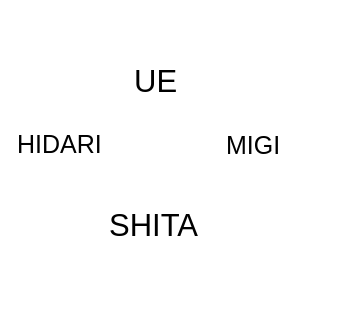 From the word doko which means “where”, wa doko desu ka is used for asking for direction. To use this phrase, fill the blank with the name of a specific location you want to go to. For example, if you want to ask for the direction to a konbini, this is what you’ll say:

Tip: Since doko means “where,” you can replace it with other question words like who and what.

Speaking of konbini, the word means “convenience store.” Konbini is considered as the 7-11 of Japan, where convenient items like food are sold. Most of the products ready-to-go items like bento and sandwiches. These places are very popular in Japan for both locals and foreigners because you can find a lot of things that you occasionally need. Knowing this word is very useful when you’re traveling.

Trivia: Konbini even has fax or xerox machines, depending on the location.

Meaning: Can you help me?

Unlike in English, Japanese words change depending on the usage. One example of this is tetsudau, tetsudatte, and tetsudaimasu. But for general use (e.g. asking for direction, etc.), you can use tetsudatte itadakemasu ka or “can you help me?”.

Tip: For serious and urgent situations where yours or another person’s life is at risk, use the word “tasukeru” or “tasukete”. This will catch the attention of people nearby immediately.

This phrase is to be used if you’re using a transportation service like taxis. Just replace the bank with the name of the place or establishment. For example:

Nihon e ikitai desu. (I want to go to Japan).

The focus word here is ikitai, which means “want to go”. This means that you can also use this if you want to express your willingness to go somewhere.

4 Japanese Words For Dining In

Meaning: How much is it?

Baggu wa ikura desuka? (How much is the bag?)

Tip: For counting, it might be better to use ikutsu, which also means “how much,” but refers to the count of specific items.

Meaning: Thank you for the food

Tip: There is also a word spoken after every meal in Japan. Gochisousama means that you’re done eating, and the meal was good.

There are different ways how the Japanese call their “meals.” It depends on the time of the day, just like breakfast, lunch, and dinner.

Tip: If you want to invite someone for a meal, just add o tabemashou

Tip: If you’re talking to someone close to you, you can use ga aru no instead.

4 Greetings And Formalities in Japanese

When you see someone you know in the streets, it’s polite to greet them Good Morning. Greeting someone is quite a big aspect of the Japanese culture since it is seen as a polite gesture. Hence, one of the phrases you should learn while staying in Japan is saying “Good Morning,” or Ohayo gozaimasu.

Ohayo gozaimasu is also used during noon or lunchtime. Don’t get surprised if you receive such greetings during lunch.  When greeting a friend or a close family member, the word gozaimasu can be omitted.

Konbanwa literally means “this evening,” usually used to acknowledge that the time is night and not day or afternoon. Sounds a little bit weird right? Regardless of the literal meaning, Konbanwa is used similarly to that of “Good evening” in English. It’s also a popular method of being polite while breaking the ice if you just met someone.

Konbanwa is great if you met someone while doing something at night (attending an event, accidentally meeting someone in a konbini, etc.) But what if you want to signal that you’re going to sleep? This is where oyasumi nasai is used.

Oyasumi nasai means you’re going to bed and wish the other person goodnight. It is also the default phrase to use if you’re already leaving an event and going home. Oyasumi nasai is used for someone who is superior to you (someone who’s older or has a higher position in an organization). Nasai can be omitted if you’re talking with a friend or a family.

When the event starts: Konbanwa

When the event ends or if going home: Oyasumi nasai / Oyasumi

Sayonara is the proper word to use if you’re saying goodbye to someone or a group of people. Although it is translated to “goodbye”, It has a deeper meaning. Sayonara implies that you might not see the person for a long time or ever.  Basically, if you use sayonara, you’re not expecting to see that person again.

Knowing the context of sayonara is quite important because it’s easy to misuse if you’re a beginner. Using the word ja ne (see you later) or mata ashita (see you tomorrow) is preferred.

And that’s it for the 20 common words and phrases you should learn in Japanese.

It is a challenging language but still one of the most popular among studying polyglots.

If you’re having a hard time understanding the language independently, you can use online language tutoring services like JustLearn to raise your proficiency.

Is Japanese hard to learn?

For English speakers, Japanese or Nihongo is one of the hardest languages to learn. Not only is it very different in English, but it’s also very challenging for other language speakers as well. Although there are fun ways to learn Japanese (such as learning with Japanese songs), learners need to make more effort when learning this language.

What are some common Japanese words?

How many words are commonly used in Japanese?