Did you know that there are 24 English speaking countries on the African continent?

According to the World Linguistic Agency, Uganda is rated as the best one on the list. It’s followed by South Africa in second place, and then Nigeria, Kenya, and Namibia.

In this article, you’ll learn more about all these African countries where English is spoken everyday. You’ll get to know each and one of them as we go through this diverse and amazing continent together.

All 24 English Speaking Countries in Africa

Uganda is rated the best English speaking country in Africa by language proficiency.

Besides English as their official language, in this country, there are 60 more dialects.

English is used in schools, government, and many institutions in the country.

Many types of research have shown that the majority of people can fluently articulate English sounds,  with a flawless English accent.

“The Pearl of Africa” is how Winston Churchill used to call Uganda. And it truly is a pearl, with its snowy mountains, glassy lakes, and amazing savannas.

The most common spoken language is Zulu while English comes in the fourth place, with 9.6%.

However, English is widely spoken in urban areas, used by the government and the media.

From true African deserts and forests, the 3,000 km amazing coastline with perfect beaches, it is ideal for the Sun worshippers, to urban and fine shopping and dining for more sophisticated ones.

West African culture can be described with one word; Nigeria. This country, like many others, inherited English as its official language from the colonial era.

Nigerians have a flawless English accent and they construct perfectly good and correct sentences.

Long exotic beaches, ancient cities in the north, river deltas to the Yoruba kingdoms and the stunning environment make Nigeria a paradise for tourists.

Like many other countries in Africa, that were former British colonies, English is also official in Kenya along with Swahili.

It’s interesting that even though both languages have official status, Swahili is more predominant than English.

Besides these two official languages, there are about 68 other languages in Kenya.

Kenya is called East Africa in microcosm. It’s a country of extremes and contrasts.

The modern and urban city of Nairobi on one hand, and tribal cultures on the other, savanna safaris, forests, and open plains are all worth visiting. 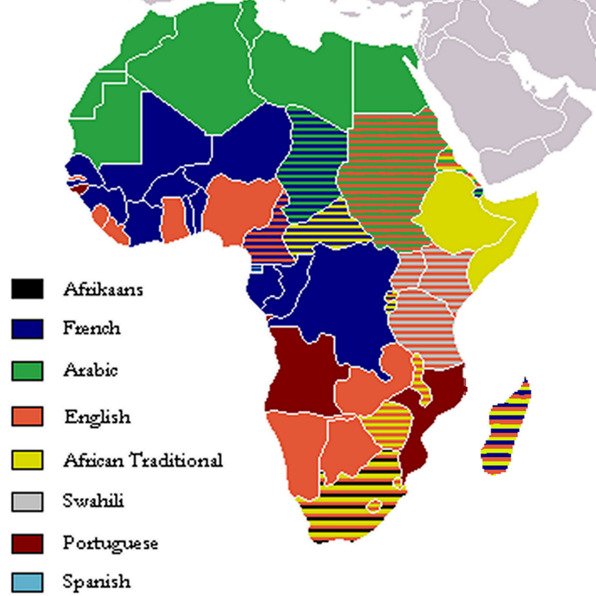 Zambia is the country of the Bantu language family. It’s claimed that in Zambia there are more than 70 different languages and dialects spoken.

However, when Zambia got its independence, in 1964, English became the official and national language. It’s used in business and education, and usually used by the educated population.

You must have heard of their largest waterfalls, Victoria Falls. And just like the falls, Zambia is one of the most beautiful, friendly, and diverse countries on the entire continent.

According to the World Linguistic Agency, Malawi takes the 6th place by English proficiency. Chichewa is considered the national language, spoken by 57% of the population. Chinyaja with 12.8%, and Chiyao with 10.1%.

The stunning lake Malawi, natural beauty, and wildlife are great reasons to go and meet this “Warm Heart of Africa”.

Even though English is the only official language, only 7% of the population speaks it. The languages mainly spoken in Namibia are Afrikaans, German, and the native language, Oshiwambo.

What makes them unique are their click consonants. For most of the learners, they are quite hard to pronounce. Take a look at the video below:

In Botswana, English is the official language but isn’t spoken as much. Setswana is considered the national language and it’s spoken much more than English.

Even though the majority of the population claims other dialects as their native ones, a lot of them have a working knowledge of English.

Home of the famous Kalahari Desert, Botswana is a country with friendly and open-hearted people.

Thanks to the more stable situation in the country, Zimbabwe slowly started to attract tourists with its amazing nature, exotic wildlife, and ancient places.

In Zimbabwe, English is the official language, but only 2.5% of the population consider it their mother tongue. Shona is widely spoken, with 76%, Nbedele also, 18%, as well as other minority languages such as Tonga, Sotho, and Kalanga.

Ghana is a country with 18 languages. Akan is the most spoken one, besides English. 11 of them have the status of government-sponsored languages. Some of them are Akan, Ewe, Ga, Nzema, Gonja, and Kasem.

Like in many other West African countries that are former British colonies, English has the official status in Ghana too, along with lingua franca.

Rwanda is the most famous for gorillas trekking, safari on Akagera National Park, and Nyungwe Forest, so if you are near this beautiful and wild country, don’t miss out on all the beautiful places it has to offer.

Along with French and Swahili, English is one of the official languages. “The Land of Thousand Hills” is famous for its volcanoes, national parks, and hills.

However, educated people mostly speak French between themselves.

The Republic of Sudan has two official languages: Arabic and English.

This country is officially called The Republic of Gambia. It’s one more former British colony, where English kept its official status.

However, The Wolof language is the most widely spoken here. Besides Wolof, there are also Mandingo, Pulaar, Jola, Sere, Manjak, and many more tribal languages.

Long walks on sandy beaches, long palm-trees, charming fishing villages, and rich wildlife are ideal for those who know how to appreciate the beauty of nature.

Sierra Leone became a focal point for trade between Africans and Europeans.

This country is known for the white sand beaches, and according to travel bloggers, it’s a heaven on Earth. However, the government considers it corrupted and not so safe for tourists.

This remote tropical island is a part of the British Overseas Territory.

It has a population of approximately 4.500 and it was once one of the most isolated islands.

Nowadays, many locals decide to emigrate to Australia, Britain, or South Africa.

Burundi is one of the countries of African Great Lakes and one of the smallest ones in Africa. There are 3 official languages, English, French, and Kirundi.

This country is rich with amazing lakes such as Tanganyika, Lake Rwihinda as well as many national parks. It makes you wonder how this amazing country suffered as much as it did during history.

This central African country, also called the heart of Africa, is known for its amazing wildlife.

The official languages are English and French. It’s a home of around 200 different languages, spoken by about 20 million people.

The Kingdom of Eswatini or worldwide known Swaziland is a country in the south of Africa and the last absolute monarchy. The official language is Swazi or Siswazi, along with English.

Swazis are very proud of their culture, customs, and nature but also open to showing foreigners the beauty of their country.

The Kingdom of Lesotho is an enclaved country in the south of the African continent. It’s one of the rare countries in the world that are entirely surrounded by another country. The other two are Vatican City and San Marino in Europe.

Lesotho got its independence in 1966. Since then, English is the official language.

‘Lesotho’ means ‘the land of the people who speak Sesotho,’ so this language has official status too.

This country suffered many civil wars, corruption, and political power.

However, the beauty of the language and people willing to build their country is remarkable. They are also known for their enormous hospitality, which is something we should all admire.

South Sudan got their independence from Sudan a couple of years ago, in 2011, making it the world’s youngest independent country.

It’s the only country from the Arabian world where English is a co-official language. There are more than 60 indigenous languages spoken, which include Dinka, Nuer, Bandi, and Zande.

Tanzania is, just like Burundi, a part of the African Great Lakes region.

A historical and cultural center, placed in the worldwide-known Horn of Africa, Eritrea is a small country with a population of around 6 million people.

Eritrea is still an inspirational tourist attraction for the whole world and a multi-ethnic country. Arabic and Mediterranean influence made this country what it is today.

Eritrea came from the Greek in meaning ‘Red Sea.’ It is the only country where there is no official language, but many consider English as an administrative one, used in schools, government, business, etc. Other widely used languages are Tigrigna, Arabic, Tigre, Dahlik.

In Ethiopia, English is the de facto official language, but not the primary one. The primary and official language too, is Amharic. Besides these two, in Ethiopia, there are around 83 different languages, and more than 200 dialects spoken such as Bussa, Kwama, Oromo, etc. One of them is the ancient Ge’ez.

Ethiopia is the home of beautiful wildlife, amazing tribal people, the cradle of history, culture, and diversity that will leave you breathless.

We hope that this list is helpful enough and that you now have a better picture of English throughout Africa.

As you saw, there are thousands of people that speak English, not only in Europe and America but in Africa too.

Now that you know more about English speaking countries in Africa, it’s time to get prepared and start learning English with English tutors on Justlearn.

Uganda is considered the best English speaking country in Africa.

How many English speaking country are in Africa?

There are 24 English speaking countries in Africa.

Is English widely spoken in Africa?

Yes, it's the widest spoken language in Africa next to French, Portuguese and Spanish.