French Speaking Countries (that You Can Visit and Improve your French)

Do you have any idea of how many people speak French?

Did you know that the French language is spoken in over five different continents?

And did you also know that half of all French speakers live on the African continent?

French is a native language to 80 million speakers all over the world, making it the fourth most spoken language in the world.

It is an official language in 29 countries worldwide.

The community of French-speaking nations is known as ‘La Francophonie.’ So, prepare to get to know them better in this article.

One way to get to know the French culture to its core is to learn the language with a native speaker. On Justlearn you have access to hundreds native tutors who will help you become fluent in all French aspects.

Before we get started with the article, we want to ask you something.

Have you heard of the term ‘lingua franca?’

‘Lingua franca’ entitles a common language, one that is spoken by enough people that it is the accepted diplomatic language. These days, the lingua franca is English. 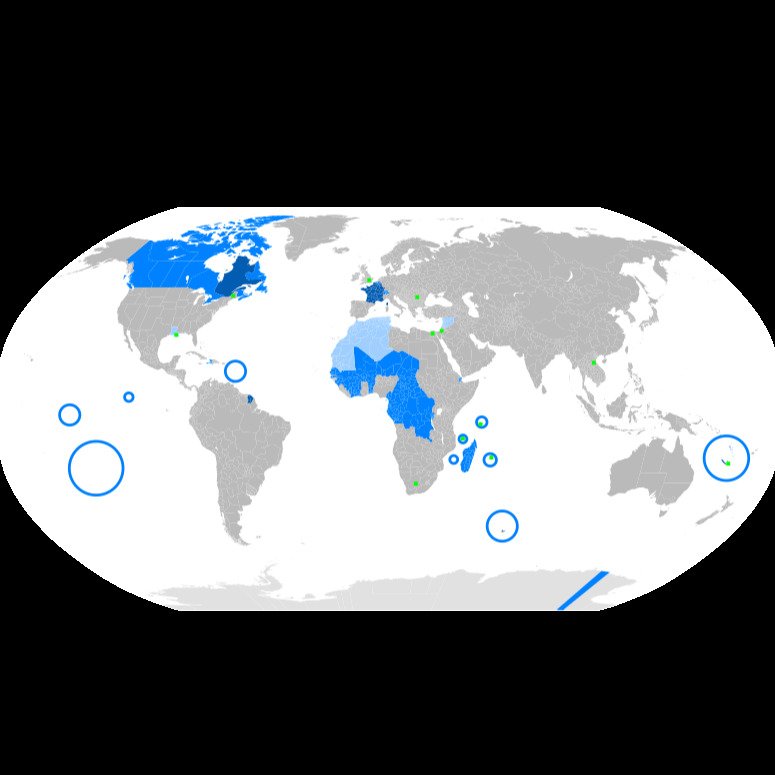 Besides France, here are 29 countries in the world that use French as an official language.

In the following lines, you will find the European French-speaking countries.

France or officially, French Republic, in French ‘République française,’ extends in western Europe from the Mediterranean sea to the English Channel and the North Sea, and from the Rhine to the Atlantic Ocean.

There’s no person in the world who hasn’t heard of France and its capital city Paris famous for lovely art, architecture, literature, politics, etc.

We could write about France so much, dedicate so many articles to France and its language, and it still wouldn’t be enough.

It should be enough to say that France is the cradle of democracy, modern politics, as well as the place where you can see and learn everything about art, history, literature, on one hand, and the center of modern lifestyle and fashion on the other.

With about 4 million speakers, Belgium is the second French-spoken country in Europe, third in the world.

The country is best known for chocolate, waffles, fries, and beer.

The language differs a bit from the one spoken in France or Switzerland.

Which country first comes to your mind when you say ‘chocolate?’

In this country, four languages are official, and French is one of them.

In the western part of the country prevails French.

About 20% of the Swiss population, or precisely, 2 million people speak French.

There are some differences between French spoken in France and Swiss-French.

Vocabulary and some expressions mainly differ between these two.

One quite common distinction is how they say the number 70. French say it ‘soisante-dix,’ which is translated as ‘sixty-ten.’ Swiss-French say it simply ‘septante.’

Luxemburg is the country between Germany, France, and Belgium. Therefore, it is not so strange that French is an administrative language there.

In 1815 Luxembourg became a Grand Duchy, and it has been a monarchy since then.

This country is famous as Europe's most prominent investment management center.

Even though Luxemburg City, the capital city of Luxemburg, is mainly unknown to tourists, it is worth visiting.

This city is a place where history is appreciated a lot, so if you are planning to travel, put this country on your list.

It is the smallest sovereign state, with about 38.000 population.

The French language is an official language in this enclave within France.

Monaco is a heaven for casinos, too.

Canada is the second-largest country in the world.

With 7 million French speakers, it is the second-largest ‘Francophone’ community.

The country is widely known for hockey, excellent athletes, and especially maple syrup, or in French, ‘sirop d’érable.’

Besides French, another official language is English.

As for the language, French and Canadian French don’t differ so much.

Differences are mainly in some parts of grammar, spoken and written.

And here is one interesting fact about Canada: Did you know that Canada has more clear water than any other country?

This island was an essential strategic place both for French and Spanish.

That’s why today’s official languages are French, Spanish, and English.

Unfortunately, this is the poorest country in the Western hemisphere, where locals mainly use Haitian Creole. A more educated population speaks French.

Apart from all the information, you’ve undoubtedly heard that Haiti is one of the most popular tourist attractions. So, one more country to practice French. 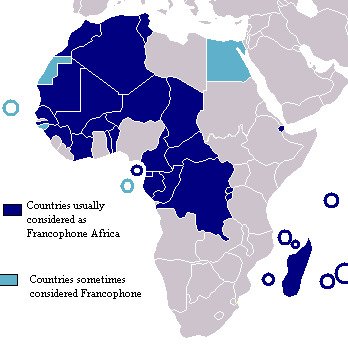 French-speaking countries in Africa are numerous since France had its colonies on this continent.

Over time, one by one declared independence, but the French language remained their official language.

This country is formerly known as ‘Dahomey’ and also used to be known as Slave Coast, the place where slaves were shipped across the Atlantic.

What is very interesting about this country is that voodoo is made at home and is even celebrated as Annual Voodoo Day.

In colonial times it was known as ‘Upper Volta.’ Today’s name, Burkina Faso, means ‘Land of the Honourable People.’

What is impressive about Burkinabes is that they are known as the most honest people worldwide.

The African country, ruled by Germans and Belgians, is best known for its delicious cuisine.

Cameroon or so-called ‘Africa in miniature’ has rainforests, but also deserts, savannahs, and swamps.

Its geographical and cultural diversity makes it very unique.

As its name implies, it is located in Central Africa.

France established the country’s current since this country, too, was one of the French colonies.

Even though it is rich in gold, diamond, oil, etc., this country is unfortunately listed as one of the ten poorest countries in the world.

The country got its name from Lake Chad.

Many people call it ‘Dead Heart of Africa’ because it is far away from the coast and sea.

Chad is rich with history and culture. It was the crossroads of civilization more than 2,000 years ago.

Today, this ex-French colony is a beautiful mix of all nations, religions, and history.

In East Africa, there is one small independent state with French as an official language.

Miles of beautiful sand beaches are quite popular among tourists.

Although it is one impoverished country, where many people leave and mainly go to France searching for work, their hospitality and optimism along with miraculous nature makes a great mix.

The Democratic Republic of Congo is one more African country where French is an official language.

This country is known for exploitations in minerals, but also as one of the worst colonisations in human history.

Cote D’Ivoire in French, or Coast Ivory, is one well-developed country, where people live in harmony.

Djibouti is one of the four countries that are part of the Horn of Africa.

90% of this country is covered with dessert.

Djibouti has no rivers, only salt lakes in the desert. One of them is Lac Assal of Djibouti, the saltiest lake, even saltier than the Dead Sea.

Even though French is an official language, only 17.000 of the population speak French; the elite.

Equatorial Guinea is the country in the West part of Africa, with a population of around 800.000, which is one of the richest in Africa. Even though each ethnic group uses its own language, official languages are Spanish and French.

As the whole continent, Equatorial Guinea’s sand beaches and nature makes you feel like you are in Paradise. It is such a pity that this country is among the poorest ones.

The Bateke Plateau, savannah and forest galleries, and Mayumba, a strip of land between a sea and lake, are ideal to be visited in the summer.

Besides the French language as official, this country is famous for primates, from little vervet monkeys to chimpanzees.

One more thing typical for Guinea is marvelous waterfalls. The most impressive waterfall is ‘Chutes de Dittin.’

Unique wildlife, home to unique flora and fauna, and sand beaches and nature that takes your breath away; this is Madagascar.

Located in the south of Africa, this coast is also one of the Francophone countries.

After its independence in 1960 from France, French remained an official language.

It is known for many festivals.

One of the most popular is ‘Festival au desert,’ or in English ‘Festival in the desert’ outside the Timbuktu.

Traditional tuareg music, but also world popular music, are presented at this festival.

Niger got its name by the Niger River.

Worldwide, this country is also known as ‘Frying Pan of the World,’ and it is considered as the ‘hottest nation in the world.’

If there are some dinosaur-lovers among you, then you would be pleased to hear that one dinosaur is discovered in Niger and it’s called ‘Nigersaurus.’

As opposed to the Democratic Republic of Congo, this country is called Congo- Brazzaville.

It was a Belgian colony located northwest, while the previous one is on the southeast of the continent.

Rwanda has a delightful climate, and it is the most famous producer of tea in Africa.

This East African country has a lot of potential since its nature is unique: national parks, volcanos, lakes, hills.

So that is why it is called ‘The Land of Thousand Hills.’

African culture, along with French influence, makes a marvelous mix in history and culture in this country.

Senegal is famous for its exotic dance, traditional wrestling, and football. Let’s not forget the amazing beaches which attract thousands of tourists every year.

Let’s say it this way: Paradise on Earth.

Sandy beaches and deep blue water in the eastern part of the African continent are one of the favorite honeymoon destinations.

Besides Paradise, this place was also the land of pirates.

It is believed that about 160.000 $ were hidden and not discovered yet.

Togo is one more French-speaking country in West Africa.

It is well-known for its history and culture.

There is a lot to be seen in this small country, such as Tamberma Valley, outstanding Lake Togo, or Lome, the center of accommodation and attraction.

There are so many fantastic things to do and see in this North African country.

All of them are unforgettable adventures.

El Djem, ancient building, Bula Regia, Kairouan, or Carthage are just some of the things that are worth visiting in Tunisia.

Australia and the Pacifics

Vanuatu comprises about 80 small islands in the South Pacific Ocean, west of Fiji, and east of Australia.

This country is home to bungee jumping.

Every year in spring, men climb on a 100-feet- high platform and jump.

This event is held to honor the yam fertility harvest called ‘naghol.’

Along with these countries, there are also French autonomies and departments that are using French as their native language.

There are French Guiana, Martinique and Guadeloupe in the Caribbean, and French Polynesia and New Caledonia in the Pacifics.

On the African continent, in Algeria and Morroco for example, the French language has no official status.

However, it is spoken widely as well as in Mauritius.

As you may see, French is a world language.

If you learn and practice French, you will be able to speak with people from all over the world.

Are you even more inspired now to learn and master French?

Justlearn got that covered for you.

How many countries speaks French?

What are the top 10 French speaking countries?

How many countries are in the world?

How many languages do you speak? One? Four perhaps?

15 Untranslatable English idioms That Will Help You Sound Fluent

If you are trying to learn English, aside from learning common words and phrases, its also important to learn untranslatable English idioms.

Do you like fairy tales? Of course, you do. Everyone likes fairy tales.

When you hear how polyglots speak different languages fluently, it makes you think that they arent ordinary people but supernatural beings, especially

How To Talk About Furniture in Spanish: A Room By Room Guide

How to Talk About Seasons in Spanish? (+Free PDF)

Are you a Spanish student? Which proficiency level are you?