Do you know that feeling when you want to express yourself with a specific word but that word doesn’t exist in your language?

It can be quite disappointing.

Imagine how nice it would be if you could describe your feelings in one word, one single word.

That’s why language learners are in advantage. Perhaps that specific word doesn’t exist in your native language but it might exist in another language.

Despite popular opinion, German is very interesting and expressive. It has a lot of words that other languages don’t.

German is also a very clever language because it can fill many gaps and explain many feelings or things that English can’t.

On top of that, there are a lot of funny German words that will be our topic today.

Today, we’ll share with you our favorite funny words in German.

This language is full of funny German phrases.

Since the words are quite long, take your time and read them slowly.

The most important thing, don’t forget to enjoy it!

The ideal translation for this word is ‘slap face.’

The word describes that person who starts talking and you immediately want to slap them in the face.

It can be someone from your work who always steals your lunch, or perhaps that annoying friend who thinks it’s amusing to use some awful words or slang.

However, be careful when you say this word. Use it only with your close friends and with those who won’t be mad.

This word can be explained as a lame excuse for something that you’ve done or failed to do. The situation requires you to give a proper explanation but you only come up with some excuse that no one believes.

For example, when you are caught in the middle of eating the cake-cream, and you have less than a second to think of a good explanation.

Therefore, it can be translated as a ‘poverty of explanation.’

Translated as ‘the reason to celebrate,’ this word should exist in every language in the world.

Imagine the following situation: it is Friday afternoon, and you’ve done all your work. You came home, and you have all day and weekend just for yourself.

So you get cozy, grab a juice, cola or beer and put some music on. Sounds perfect, doesn’t it? Well, it is ‘feierabend.’

This word is similar to nostalgia but has a wider meaning. It describes the feeling when you want to be somewhere else. It doesn’t mean that you are homesick, quite on the contrary.

It can refer to some distant places or cities.

For example, you can use ‘fernweh’ when you’re not able to go on a vacation somewhere. 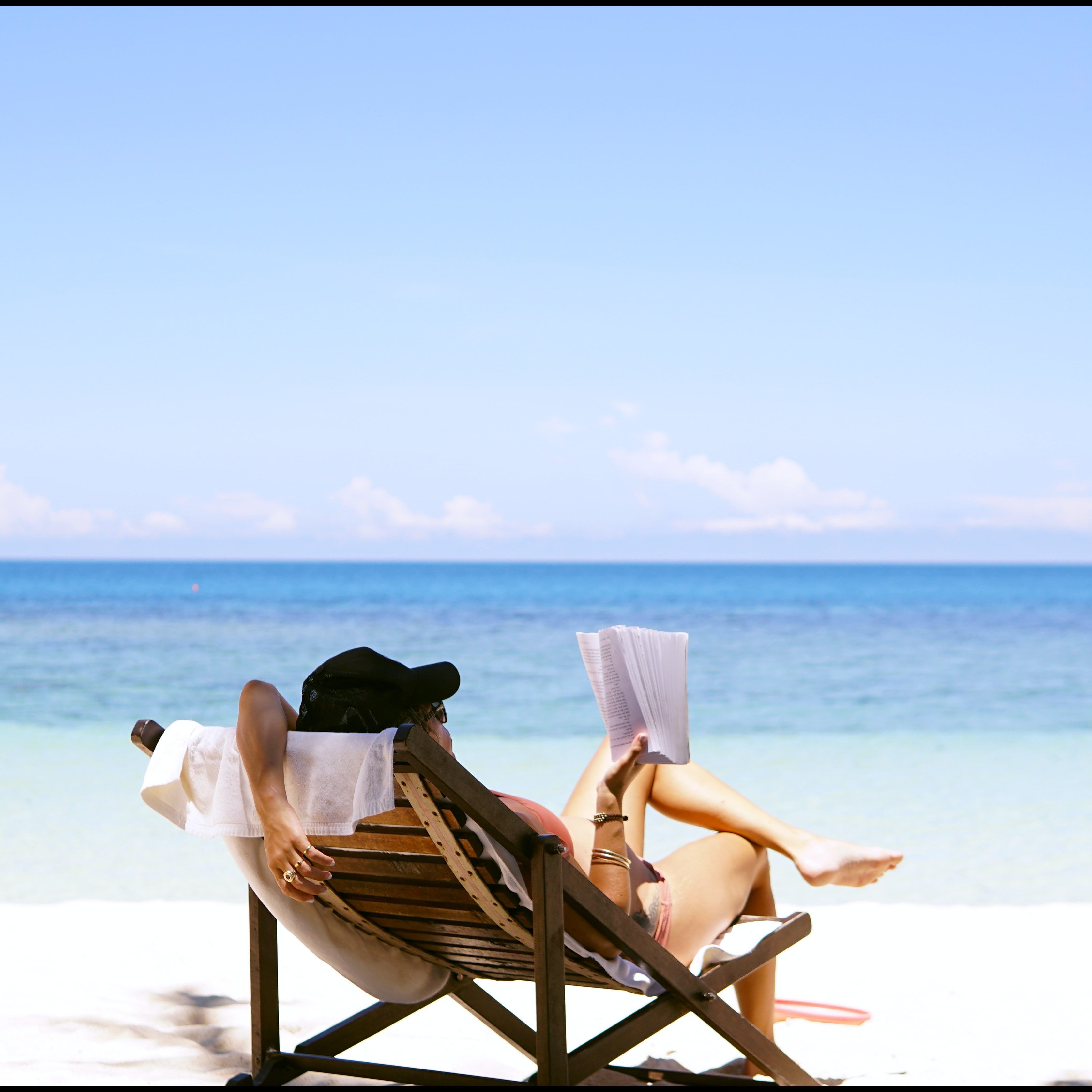 On one hand, this word is used to express empathy for someone. On the other hand, it can describe some situations that are awkward and humiliating.

For example, you went on a date. Your partner is so boring that you can’t wait for the night to be over. However, he’s having a great time especially because he is trying to talk about his experiences that are so awkward that you feel ashamed instead of him. That is why the ‘fremdschämen’ is an ideal explanation for this situation.

Perhaps in English, the best explanation for this word is ‘spring fatigue.’ However, it is more than that.

This word describes a temporary mood, laziness, and physical condition that happens to people in March and April when the spring comes. At this time, people experience low energy and weariness, some even have headaches, aching joints, and a lack of motivation to do anything.

We should all use this word even if we don’t speak German.

It’s used in situations when you have to be completely present in a moment to fully enjoy it.

In other words, it’s an experience of happiness or feeling of satisfaction with a certain situation. It’s a state of comfort and well-being.

If you wanted to say this in English, you would have to use a whole sentence instead.

However, In German, ‘honigkuchenpferd’ is enough.

It’s a situation when you get embarrassed in front of someone very important, and your face shows all your emotions and expressions, including embarrassment.

Picture this. It's early in the morning. Your alarm goes off, but you simply don’t have the energy to get up and start preparing for work.

Or perhaps another situation: you had enough time to do your homework, but you are postponing it until the last moment when you have to do it. You are too lazy to do it and chilling on the sofa seems like a much better solution.

That voice in your head, telling you that it’s better to continue sleeping or relaxing, that is ‘innerer schweinerhund,’ literally translated as ‘inner pig dog.’

This word can be translated as ‘yes and no’ simultaneously.

That stereotype about strict Germans is not so true which is seen in this example.

Admit it! There are plenty of occasions when you just want to say ‘jein.’

If you thought that this meant to cuddle, you are very wrong. This word has nothing to do with cuddling. On the contrary, it describes a chaotic state or a mess.

For example, when you enter your kids’ room, it is so messy that the only thing you can say is ‘kuddelmuddel.’

The word consists of ‘kuddel,’ from ‘koddeln,’ which means ‘dirty linen,’ and the word ‘muddel’ that means ‘mud.’

There are situations when many of us are tired of everything gloomy around us. Even though ‘lebensmüde’ expresses this feeling perfectly, you have to be careful you use it because it can sometimes have suicidal meaning. So, before you use the word ‘lebensmüde,’ make sure that you are being understood correctly and clearly.

The pleasure gained from other people’s misfortune can be expressed in German as ‘schadenfreude.’

It can be a situation at work. A colleague of yours got a promotion instead of you, and they never miss the opportunity to emphasize that. You are happy for them, but you are actually a little bit jealous. And then something terrible happens to them. They are devastated. But you, you feel ‘schadenfreude.’ You are content that they are not entirely happy.

You’ve surely had situations when you’ve thought of some crazy idea, which later appeared to be a stupid one. Like you were drunk while that idea came to your mind. So, in a moment when an idea like this comes to your mind, this is a ‘schnappsidee,’ literally ‘crazy idea.’

The ‘seat meat’ in English probably sounds, well, quite strange.

In German, however, it describes someone’s character trait. The person who is ‘sitzfleisch’ can go through anything boring, or very hard.

It's like that person can be productive for a long time or can do anything they are asked to do, even in difficult situations.

Adults remember that feeling (probably with nostalgia) when they couldn’t wait for their parents to go somewhere so that they can have the whole house for themselves. In German, it can be described with only one word, ‘sturmfrei.’

The feeling of panic as time runs out can be explained with one German word: ‘torschlusspanik, ’ or in English, ‘closing door panic.’

You can use this word in situations when you, for example, start panicking because the time goes by quickly.

If you want to translate the phrase ‘dead trousers’ from English to German, you get some completely ordinary one in German, ‘tote hose.’ However, this expression is anything but ordinary. It’s used in situations when you feel intense boredom, the moment when time stands still, when nothing happens, and when it seems like it will never end.

Yes, this is a pretty long word. But compared to other German words, it’s average. The word ‘verschlimmbesserung’ is used in situations when something bad happens, or you’ve said something that appeared to be wrong and now you regret it.

But instead of trying to ‘repair the damage,’ you are digging the hole deeper and deeper. In one word, it’s ‘verschlimmbesserung.’

This word can literally be translated as ‘fixing something to be worse than it is.’

It’s literally ‘the feeling of being alone in the woods.’

This feeling is a synonym for enjoying alone time peacefully, ideally surrounded by nature. You achieve some level of meditation and feel fulfilled and happy.

We couldn’t miss out on the beauty of long German words, so we had to mention the longest one.

This word is a perfect practice for pronunciation, like a tongue-twister.

They are quite useful for mastering your pronunciation. Check out these 10 German tongue twisters to improve your accent.

This word is not a mistake. And yes, it has 79 letters.

Here’s what it means.

These words are just one part of the wonderful German language.

We tried to explain them to you in English, but that’s the beauty of languages

They are all unique and there’s a lot of words that can’t be translated. That is why there are many German words in English we use every day, such as hamburgers, fest, or wanderlust.

Have you started learning German yet?

What’s the funniest German word in your opinion?

Let us know in the comments below!

What are some common German words?

What are some bad words in German?

It's a noun made of two German words: Kummer that means grief and Speck that mean bacon. It literally translates to Grief bacon and it's used to describe comfort eating, comfort food.