Do you use Google Translate?

Of course you do.

And have you ever come across any funny Google Translate fails?

Of course you have.

Even though we’re surrounded by technology, sometimes it can fail to deliver. Just like Google can. So to make your day, we decided to gather 20 most hilarious Google fails.

What Is Google Translate?

But first, what is Google Translate?

It translates words, phrases, or entire texts from one language to another instantly.

This service is completely free to use. It’s available for PC, as well as translation apps for mobile devices, iOs, and Android phones.

It can translate not only texts and documents but also speech, handwriting, and texts moving inside images.

At the moment, it supports 109 languages.

How Does Google Translate Work?

This translation machine translates documents to English and then, during translations, searches for patterns among millions of documents, chooses words and decides how to arrange them in the target language.

The machine itself is developed as neural, so it immediately splits documents into sentences first. It means that the service has a pretty good sentence structure.

And what about the usage of Google Translate?

How To Use Google Translate?

To translate any word, phrase, or text, you have several possibilities:

Keep in mind that these two possibilities are for website usage.

However, this is not a person. And language is the method of human communication that is used structurally.

Therefore, it makes mistakes, the ones that humans wouldn’t. Yes, translators cost, and you can’t get the translation immediately like with Google Translate.

So, both of them have pros and cons of why (not) use them.

Long story short, Google Translate is good as a first step when you have to find out the meaning of a word or phrase. Otherwise, for more professional translation, we suggest you turn to translators.

The Internet is full of funny Google Translate fails.

Here we made a list of the most entertaining ones. You can find them in the following lines.

Feel free to laugh out loud.

Someone needed to translate ‘Fall protection’ from English to Spanish. Google translated it as ‘Otoño protección.’ The only weird thing is that Otoño means ‘autumn.’

German indeed has very long words, so perhaps Google wanted to save some space.

That’s why it translated from English to German, the number thirty-five only with numbers. Maybe Google translate thought about German words in English, so why spend time translating it now, when it’s almost the same. But, is it?

Was it a bug or Google itself wanted to make a joke, we will never know. Someone discovered that when you translate ‘Lady Gaga’ from Malay to any language, let’s say, Polish, then you get the translation ‘Britney Spears.’ 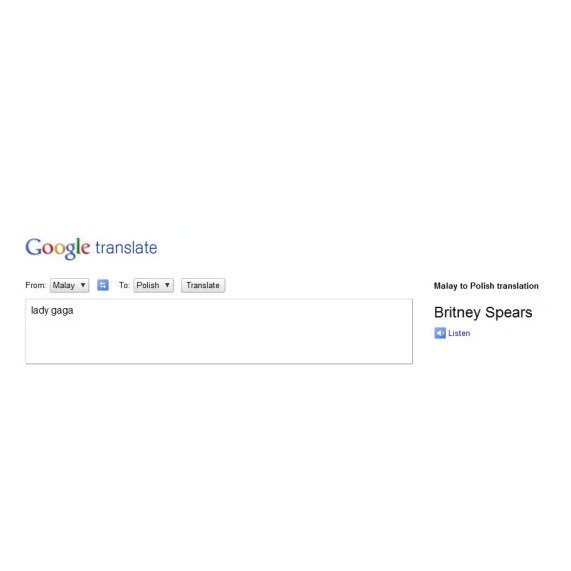 We know that these two languages belong to different language families, but that much is different… After all, both of them are spoken by humans.

Take a look at how you can get the ‘Pokemon’ translation from German to Turkish.

It would be really great, especially for kids, to just shout ‘aaaaaaaaaaaa’ to name Pokemon.

French people are romantic and passionate, just like their language but they certainly aren’t vulgar as Google translate might think. The sentence ‘Take a dirty picture for me’ from English to French is translated as ‘Prendre une photo coquine pour moi.’ If you want to translate back from French to English, then you get ‘Take a picture for me slut.’

Or perhaps Google Translate didn’t quite get French that day.

Anyway, you should take a look at the next image. 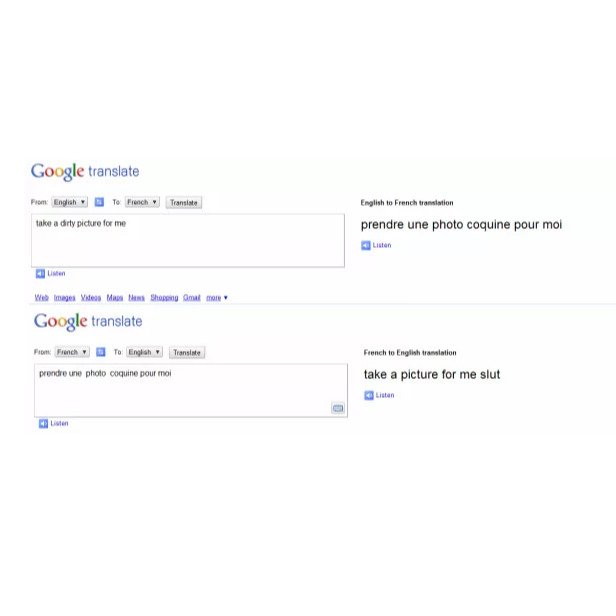 People are not the only ones deciding between iPhones and Androids. Machines do it as well, apparently. Take a look at this German-English translation:

Even though this mistake was repaired the minute it was made, the image remained as a witness. When you want to say something about hatred, then Japanese Google Translate gets confused a bit. Maybe it isn’t its fault since the Japanese are worldwide-known as pleasant and calm people.

So, when you want to know how to say ‘I really hate this company’ in Japanese, then you get the translation like in the image. But when you translate the Japanese sentence back to English, then you get ‘Our company is really using Facebook.’

And who says that Google translate isn’t honest? 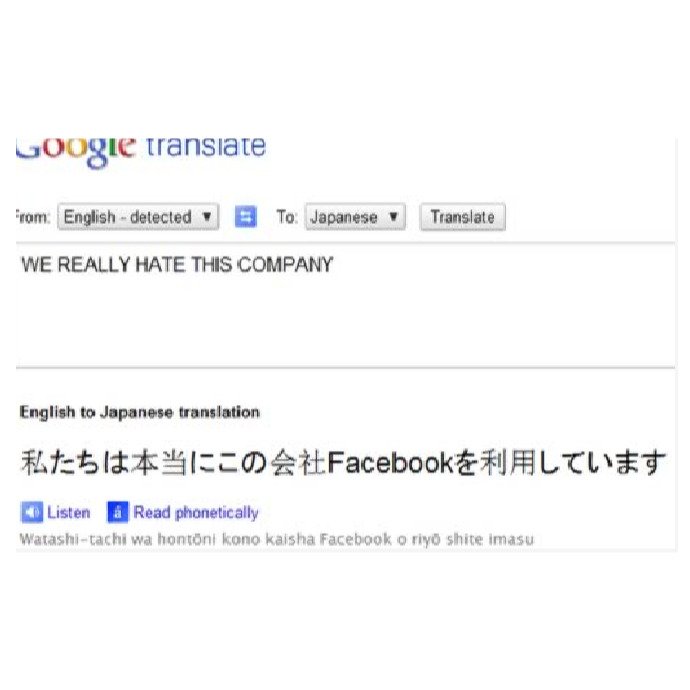 Maybe Google Translate doesn’t know that we live in the 21st century and that women have equal rights as men. 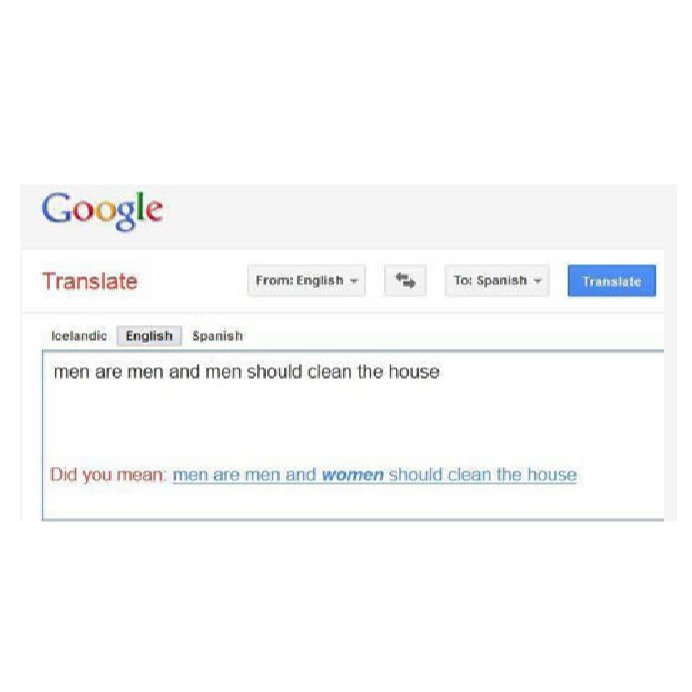 If you want to translate the sentence from Swedish to English, you might get a bit confused. Or at least Google Translate might. It’s still weird; do we have to drink juice or to wear it? 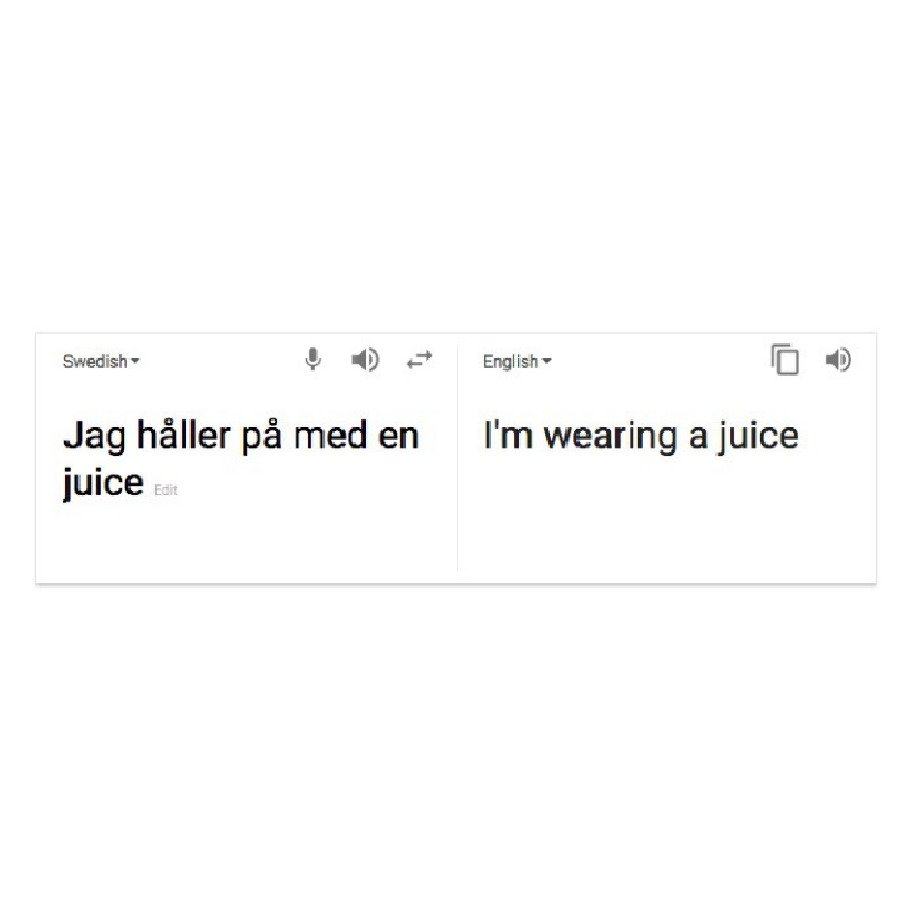 If you want to get the translation of the sentence ‘Just wipe that dirt off your shoulder’ from English to Greek, you’ll perhaps get, if not the same, then similar meaning. But if you want to translate back from Greek to English, then maybe Google Translate assumes that you’ve already wiped the dirt, and the only thing remaining are the shoulders. 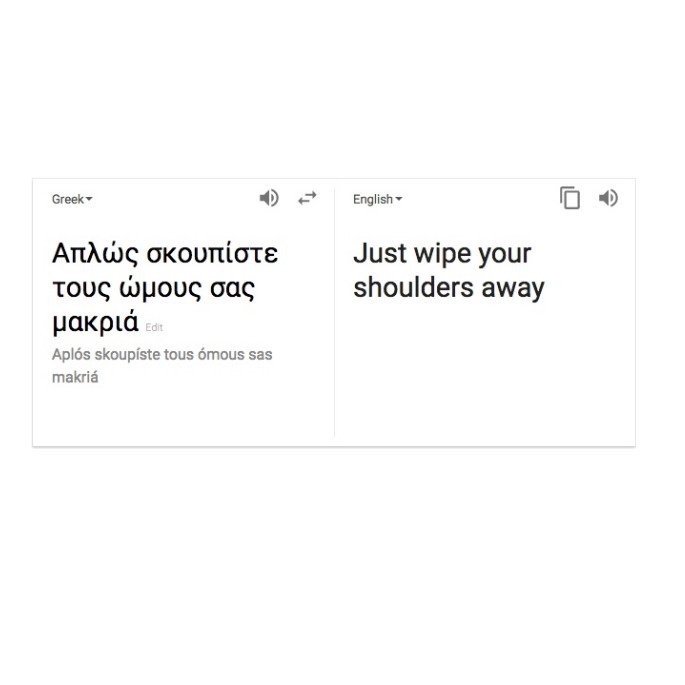 It’s the moment when you are sure you know that something isn’t right, even if you don’t speak the language. ‘She is a daddy now’ makes all of your logic disappear in a second. 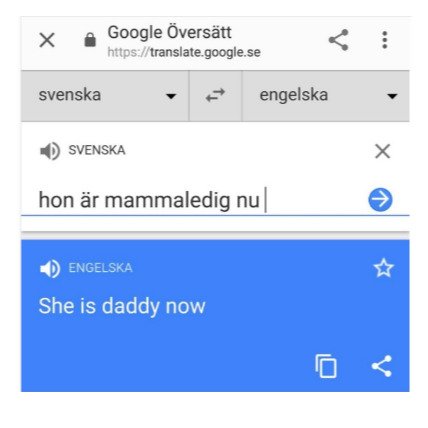 Translating long sentences can be hard, especially if you want to translate them immediately, as Google Translate does. And as a result, you get one entertaining story. Confusing, perhaps, but certainly entertaining.

We already talked about German words and phrases and how they can be very long, hard to pronounce, etc.

But what about some simple sentences, and pretty simple words in them? Is German really such a hard language?

Let’s take a look at the next image: 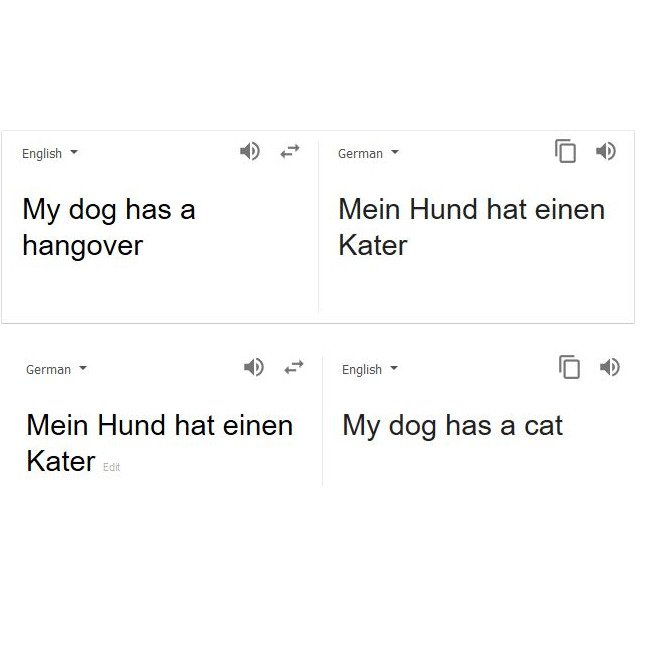 Some translators find it challenging to translate some phrases because there is no point in a literal translation. You have to find a suitable equivalent in the target language.

Google Translate surely doesn’t like translating these phrases. However, when you get the job, you have to do it, haven’t you?

So, when it got to translate ‘beat around the bush’ to Dutch, it was a piece of cake. It is ‘versla de bush.’ But the hard part is when it has to translate back to English. Here is what we get: 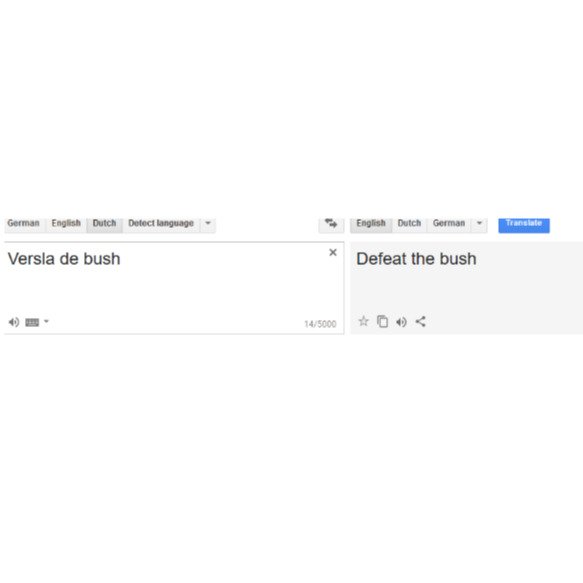 For some, Somali can be difficult, perhaps a bit strange. Others surely consider it amazing.

The great thing about this language is that the more you type the ‘ka’ word in Google translate, the better the translation in English is. Or at least that’s what Google thinks. The ‘ka’ is typed 26 times. 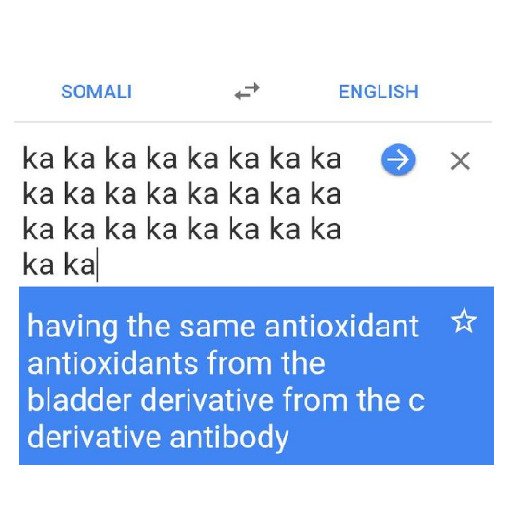 Who would say that the translation machine, the best one, Google Translate, can lose concentration?

Well, that can happen.

It’s not Google who didn’t want to translate the following text. It was perhaps too tired or couldn’t do hundreds and thousands of sentences in a minute. After all, it is really fast. Try doing it, and you will fail, too. 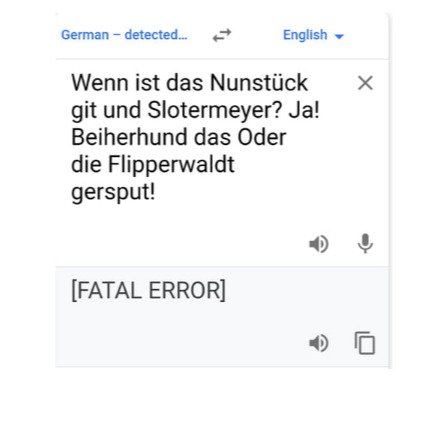 Everyone knows who Bjork is. Thanks to her, Iceland became worldwide-known. A famous singer, with a voice like an angel, would be honored that English recognizes her as a singer when you want to translate something to Icelandic.

However, when you type ‘lalalalala’ in English and put Icelandic as the target language, Bjork appears. It’s like Google itself can sing her songs.

If you want Google Translate to make funny sounds, engine sounds, for example, then put the source language English and the target one Serbian. Then type into the source language the ‘R’ letter as many times as you want. The more, the merrier. Click then the ‘listen’ button. 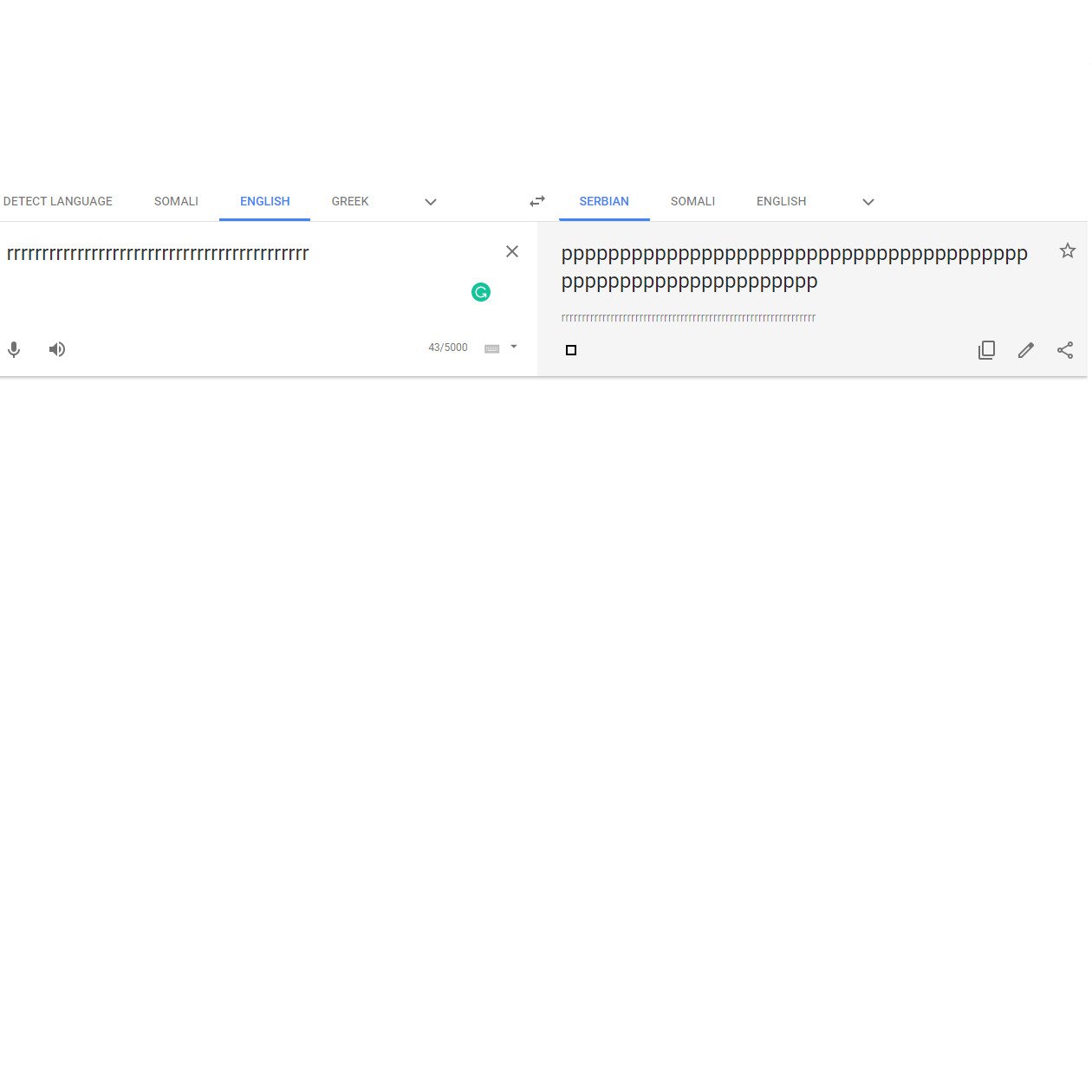 We’ve lived so long thinking that ‘Hakuna Matata’ means ‘No worries.’ At least that’s what the Lion King was saying.

But, Google Translate says something else.

Type in English ‘No worries’ and translate it to Swahili. The result is devastating. 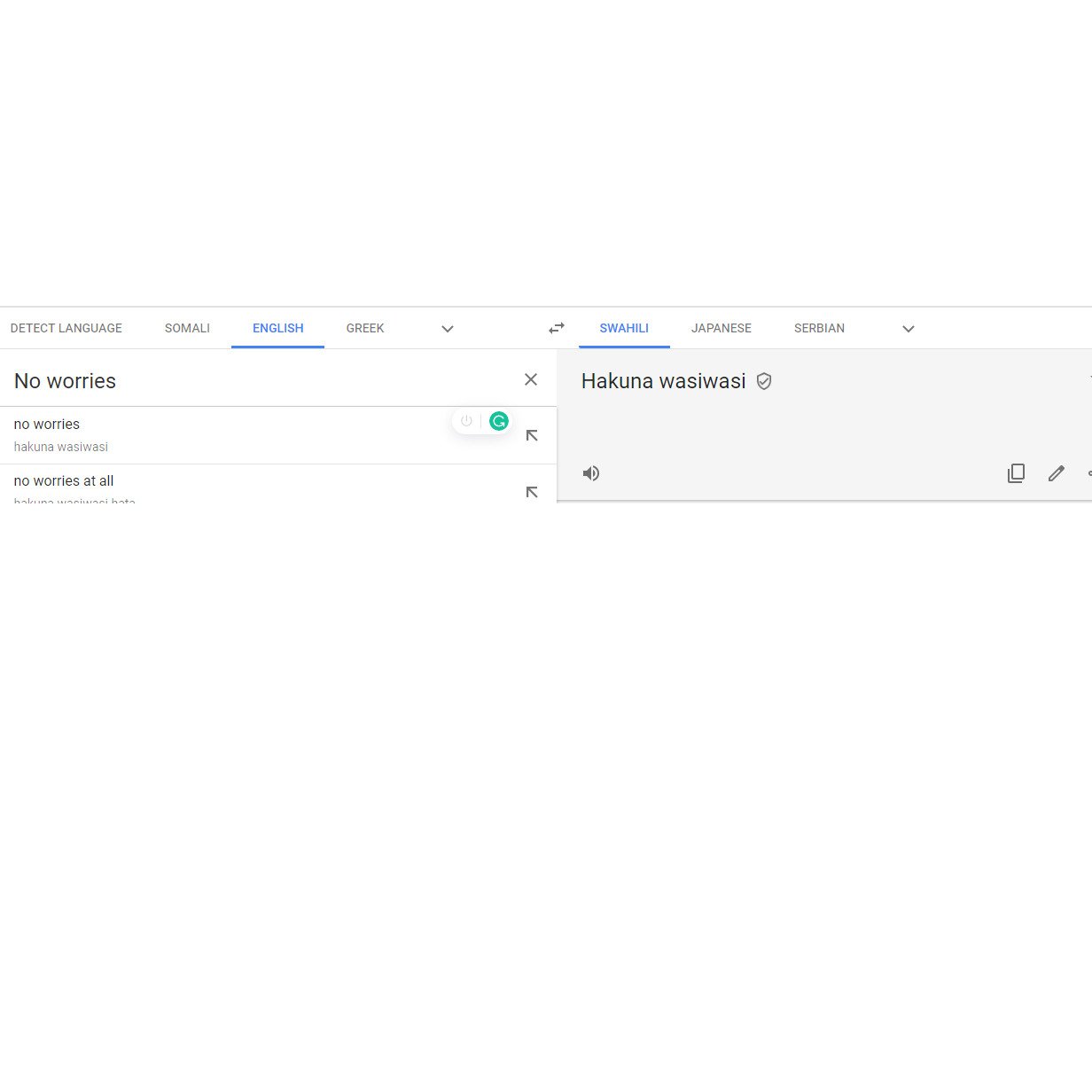 Now, this translation is correct, punctual, and honest.

No matter if men and women speak the same language, they actually don’t understand each other at all. Maybe a little, but not enough.

So, Google should consider extending language pairs like this one: 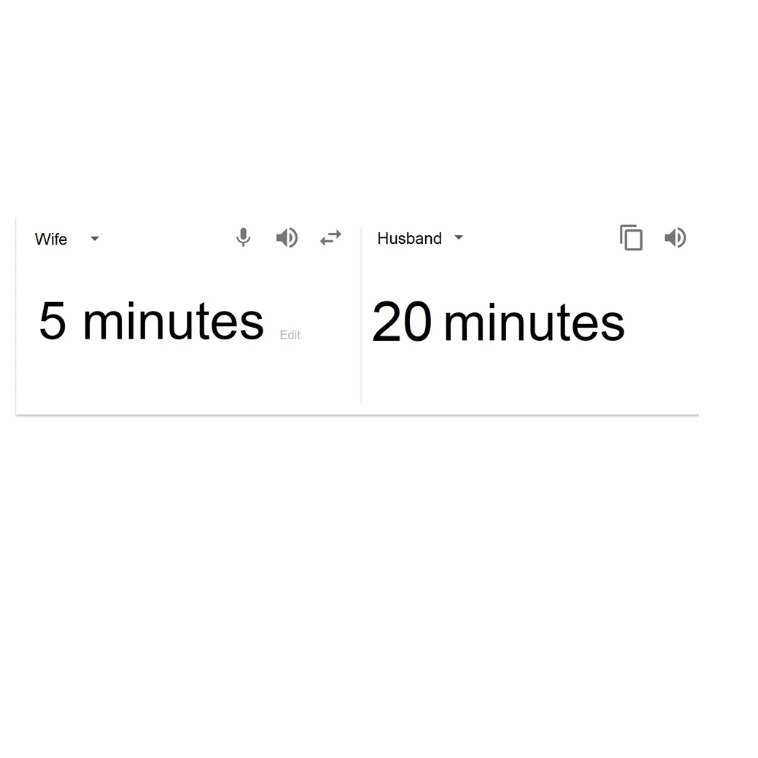 Those were 20 most funny and entertaining Google Translate fails.

It’s essential to mention that this article was all about having fun and relaxing.

As you may see, mistakes are not something you should be ashamed of. It happens to everyone. And it’s not the end of the world.

After all, we all learn from our mistakes, don’t we?

Do you have some funny google translate fail to share with us? Leave it in the comments below!

How do I fix Google Translate error?

You can try re-installing the app. Try to delete cache and cookies. You can also contact their customer support.

Why is Google Translate not accurate?

What language is Google Translate worst at?

Chat with my AI friend